Watch this invitation to the First Presidency's Christmas Devotional on Sunday, December 3, 2017, at 6:00 p.m. MST.

The program, originating from the Conference Center, will include Christmas messages by General Authorities and General Officers of the Church.

The Mormon Tabernacle Choir and Orchestra at Temple Square will provide the music.

Stake technology specialists should refer to the broadcast schedule when it becomes available approximately three weeks before the event.

Tickets to the live event have all been distributed. Learn more on the Temple Square Events page.

Social media sharing To participate in conversations about the Christmas devotional on Twitter and other social media channels, use #ChristmasDevo.

Video and audio recordings of the devotional—along with text from the messages in English, Spanish, and Portuguese—will also be provided on broadcast.ChurchofJesusChrist.org and in the Gospel Library app within a week. These recordings may be used as part of local unit or family Christmas celebrations and gatherings. 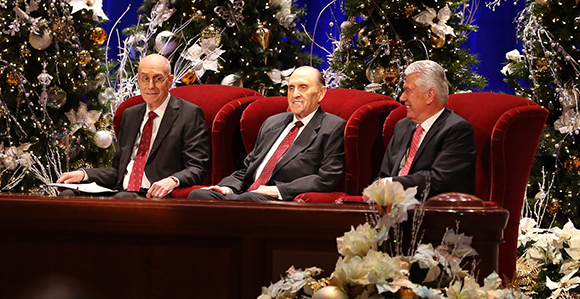