2012 Meeting Invites Young Women to Arise and Shine Forth 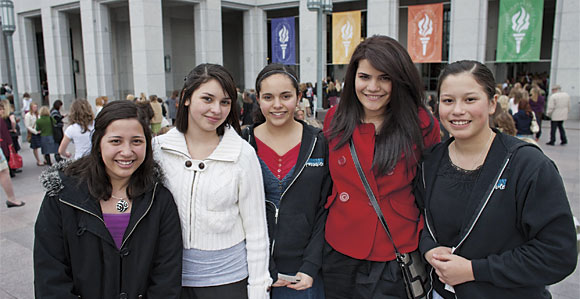 Each year in March, young women around the world gather to listen to messages from the Young Women general presidency and a member of the First Presidency.

“Arise and shine forth, that thy light may be a standard for the nations.” —Doctrine and Covenants 115:5

This year’s general Young Women meeting of The Church of Jesus Christ of Latter-day Saints, held annually in March, will take place on Saturday, March 24, 2012, at 6:00 p.m. mountain daylight time.

The 2012 Mutual theme is “Arise and shine forth, that thy light may be a standard for the nations” (Doctrine and Covenants 115:5).

The Young Women general presidency invites all young women, their mothers, and Young Women leaders to attend, whether in person at the Conference Center in Salt Lake City, Utah, or by watching the broadcast.

It will also be available on various other cable, satellite, and Internet TV or radio stations throughout the world, including Mormon Channel HD Radio and the Mormon Channel app on Roku. Check local program listings for availability in your area, or visit mormonchannel.org, byubroadcasting.org, or ksl.com for more information.

Where possible, the First Presidency encourages meeting together in chapels to view the broadcast.

For units that do not receive satellite broadcasts, recordings of the meeting will be available through local materials management offices. Leaders should arrange to show the recording to these units.

Each year, the meeting is also archived in dozens of languages at conference.ChurchofJesusChrist.org for future reference. Addresses from the general Young Women meeting will also appear in the May 2012 issue of the Ensign and Liahona magazines.