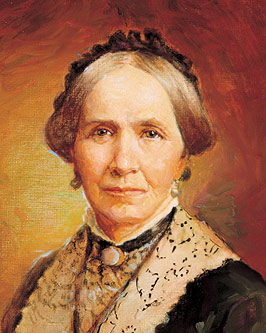 Zina Diantha Huntington Young, third general president of the Relief Society, was fondly known by the sisters of the Church as the “heart” of Relief Society. “Sister Zina was all love and sympathy, and drew people after her by reason of that tenderness,” wrote Susa Young Gates, one of the most prolific LDS writers of that time.1

With gentleness, kindness, and the power of God, “Aunt Zina” inspired the women to be better. “Sisters, it is for us to be wide awake to our duties,” she said. “The kingdom will roll on, and we have nothing to fear but our own imperfections.”2

With the tenderness she was known for, Zina taught the importance of a personal testimony of the restored gospel. “Seek for a testimony, as you would, my dear sisters, for a diamond concealed. If someone told you by digging long enough in a certain spot you would find a diamond of unmeasured wealth, do you think you would begrudge time or strength, or means spent to obtain that treasure? . . . If you will dig in the depths of your own hearts you will find, with the aid of the Spirit of the Lord, the pearl of great price, the testimony of the truth of this work.”3

But since the day she picked up the Book of Mormon as a 14-year-old girl and felt the burning in her heart that it was true, nothing could harden her heart or make her testimony waver.

In her autobiography, she wrote, “Before my maker I wish to bear a faithful Testimony that this is the work of God & each year it is more precious.”5

Zina Diantha Huntington was born January 31, 1821, in Watertown, New York, to William and Zina Baker Huntington. She was the seventh of nine children. Zina’s parents were strict Presbyterians and set good patterns for their children. As a family, they read the Bible daily, sang hymns as Zina played on the cello, and prayed together morning and night. Zina’s mother was known for taking care of those in need, while her father had studied the Bible enough to conclude that none of the churches at that time “had the organization peculiar to the primitive church.”6 So when the family heard the restored gospel, all but her oldest brother, Chauncy, embraced it. Hyrum Smith baptized Zina on August 1, 1835.

Zina married Henry Bailey Jacobs on March 7, 1841. They had two sons but did not remain together. As a plural wife of Brigham Young, Zina had one daughter, and she raised four other children as her own after their mother died. Blessed with the gift of healing and limited medical training, Zina helped the sick and delivered countless babies. She died August 28, 1901, in Salt Lake City.

Before serving as general Relief Society president, Zina spent 21 years traveling the Utah Territory organizing Relief Societies with her dear friend Eliza R. Snow, who was then the Relief Society general president. After Zina became general president, she continued and expanded those visits beyond Utah, adding an emphasis on local Relief Societies creating their own nursing classes and improving medical care. She opened a nursing school and headed the school of obstetrics. She advocated women’s suffrage, served as president of the Deseret Silk Association, and was matron of the Salt Lake Temple from its dedication in 1893 until her death.7