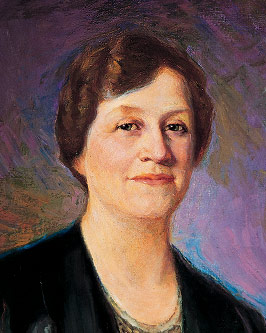 “When Mother went to President [Heber J.] Grant’s office to be set apart, she felt sure he had been misinformed about her abilities,” said her daughter, “so she told him she’d be happy to do her best in whatever he asked her to do, but she wanted him to know that she had limited education, and very little money and social position, and she was afraid she wouldn’t be the example that the women of the Relief Society would expect in a leader. She finished by saying, ‘I’m just a humble woman!’ President Grant answered ‘Sister Louizy, 85% of the women of our Church are humble women. We are calling you to be the leader of them.’”1

As it turned out, Louise was exactly what the women of the Church needed. With the onset of the Great Depression, she understood the needs of the struggling sisters and had great empathy for them and wisdom to share with them. “She spent much of her time focusing on sisters who lacked formal education and material wealth, feeling she was in similar circumstances.”2 “Sister Robison stressed the volunteer compassionate services,” according to Belle Spafford, ninth general president of the Relief Society. “‘Go where you’re needed; do what you can.’ That was her theme.”3

“If we only half do our work,” said Louise, “we will have no pleasure, if we do it from a sense of duty we will have no joy, but if we feel we are a branch of this vine, and that our Father in Heaven has felt us to be worthy to be a member of that branch, and that we can carry this work when it is here to do, then we will have joy.”4

Sarah Louisa Yates, later known as Louise, was born May 27, 1866, in Scipio, Utah, where her parents, Thomas and Elizabeth Francis Yates, had been called to colonize Round Valley in Millard County. She was the second of five children. Living in pioneer conditions, Louise learned how to work with wool, knit, and braid straw hats.5

Fourteen-year-old Louise and her sister attended Brigham Young Academy in Provo, Utah, for a year. Afterward Louise took a six-month dressmaking course, which served her well as she directed the Temple and Burial Clothing Department later in life. Her schooling was cut short when she met newly returned missionary, Joseph Lyman Robison. They were married October 11, 1883, and had six children. After her children were grown, Louise enrolled in university extension classes to make up for her lack of education. For years she got up at 4:00 a.m. so that she could study for two hours before her day began.6 She died on March 30, 1946.

Understanding the importance of helping mothers stay at home, Sister Robison opened the Mormon Handicraft Shop in Salt Lake City, Utah, in 1937. It gave sisters a place to sell their wares. She was the first general president to visit Relief Societies in Europe. Relief Society choirs became known as the “Singing Mothers” after Louise’s favorite quote, “A singing mother makes a happy home.”7 She instigated the first monument to the Relief Society in Nauvoo, Illinois. The Relief Society adopted gold and blue as its official colors. But reflecting her sense of what was most important, Louise said, “Although our records are well kept, there is no human power which can give an account of the deeds of loving kindness performed by our Relief Society members.”8