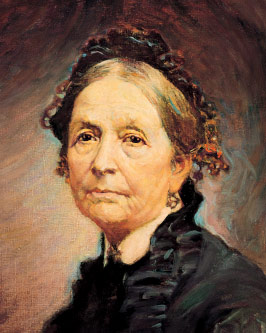 Eliza Roxcy Snow, second general president of the Relief Society, dedicated her life to serving the Lord. “To be able to do Father’s will is what I wish to live for,”1 she once said. But she didn’t wish such a life only for herself. She wanted every woman to recognize her significance in the Lord’s eyes and act upon it. “No sister [is] so isolated,” she declared, “but what she can do a great deal towards establishing the Kingdom of God upon the earth.”2

Eliza knew this not only because of the testimony that burned inside of her but because she had spent her entire life serving the women of the Church, from Kirtland to Missouri to Nauvoo to Salt Lake City. She knew their hearts, their trials, their triumphs, and the way they quietly lifted their families and one another in good times and bad. “There are many of the sisters whose labors are not known beyond their own dwellings and perhaps not appreciated there,” she said, “but what difference does that make? If your labors are acceptable to God, however simple the duties, if faithfully performed, you should never be discouraged.”3

Strengthening families and making wise use of time were priorities for her. “Let your first business be to perform your duties at home,” she said. “But, inasmuch as you are wise stewards, you will find time for social duties. . . . By seeking to perform every duty you will find that your capacity will increase, and you will be astonished at what you can accomplish.”4

Eliza used some of her time to write poetry. A profoundly wise and revelatory woman, she left behind some 500 poems—many of which provide tremendous comfort as well as doctrinal insight. Consider the third verse of her poem “O My Father,” which is in today’s Church hymnal:

I had learned to call thee Father,
Thru thy Spirit from on high,
But, until the key of knowledge
Was restored, I knew not why.
In the heav’ns are parents single?
No, the thought makes reason stare!
Truth is reason; truth eternal
Tells me I’ve a mother there.5

Eliza was born January 21, 1804, in Becket, Massachusetts, to Oliver and Rosetta Snow. She was the second of seven children. Her younger brother Lorenzo Snow later became the fifth President of the Church. The Snow family valued learning, and Eliza was a brilliant student. By the time she joined the Church in 1835, she was famous for her poems. Her autograph book includes signatures from the likes of Queen Victoria of England, Victor Hugo, Susan B. Anthony, and President Abraham Lincoln.6

It was in Mantua, Ohio, where Eliza grew up, that the Snow family heard the restored gospel and was baptized. Shortly after her baptism in the spring of 1835, Eliza moved to Kirtland, Ohio, to teach the daughters and nieces of the Prophet Joseph Smith. During this time she developed a deep love for the Prophet and a fervent testimony of his divine calling.7 She was sealed to the Prophet on June 29, 1842. After his martyrdom, which grieved her deeply, Eliza became a plural wife of President Brigham Young, who held her in the highest esteem. She never had children. Eliza died in Salt Lake City on December 5, 1887.

During Eliza’s presidency, the Primary and the Young Women’s Mutual Improvement Association were organized, the Woman’s Exponent was created, and principles of welfare were introduced. The women grew and stored grain, opened cooperative stores, and manufactured silk. The Relief Society sent women to medical school to become doctors, nurses, and midwives. In return, these women came back and taught others. Eliza served as Deseret Hospital’s first president.