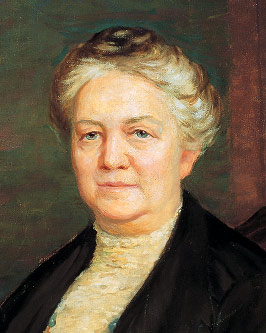 When Clarissa Smith Williams became the sixth general president of the Relief Society, women in the United States were excited about the possibilities that lay before them. They had just won the right to vote, and they were eager to make a difference in their communities.

“We have been given such blessings as have never been given to women in any other age,” Clarissa said, “and we should in every way endeavor to live up to them.”1

It was through Relief Society that the women of the Church would most effectively strengthen their families, their communities, and the world. Equipped with exceptional executive ability, Clarissa devoted herself to helping women be instruments in the Lord’s hands.

Through the newly created Relief Society Social Service Department, the Relief Society worked with wards and stakes to help needy women and girls find employment, place children for adoption, operate a storehouse for used clothing and items to be distributed to the needy, hold health clinics, send aid to war-torn Europe, and offer training courses on charities and relief work, child rearing, hygiene, disease, care for the sick, crime prevention, economic conditions, and so forth.2

Clarissa was especially concerned about the high mortality rate of mothers and infants. In 1922 Church vitals showed 58 deaths of mothers and 751 infant deaths.3 In response, Clarissa proposed that the interest from the Relief Society’s wheat fund be used “in the interest of maternity and motherhood throughout the Church.”4 The proposal was accepted, and the wards and stakes around the world used the funds to do everything from assembling maternity loan chests for home deliveries to opening maternity hospitals. By 1924 the Presiding Bishopric reported the lives of 500 children had been saved by the Relief Society’s efforts.5

“This great trust which the Prophet Joseph Smith gave to women eighty years ago,” Clarissa said, “has been a great blessing, not only to the Relief Society women but to the communities in which they have lived. Through our organization the gospel has been preached, the needy have been looked after, the sick have been comforted, the downhearted have been cheered, a message of love and of blessing has ever emanated from Relief Society workers. … The greatest thing in the world is love. And if we keep that always in our hearts, and give it as a message to those about us, we will be blessed and will be instruments in blessing those with whom we associate.”6

Clarissa West Smith was born April 21, 1859, in Salt Lake City, Utah, to Susan Elizabeth West and George A. Smith. She was the first of five daughters. Clarissa’s best friends were daughters of President Brigham Young.7 She graduated from the University of Deseret (later the University of Utah) with a teaching certificate and afterward opened her own private school in Parowan, Utah.

On July 17, 1877, Clarissa married her sweetheart of two years, William Newjent Williams, the day before he left on a two-year mission to his native land of Wales. She taught school until his return. They had 11 children. Three died before reaching adulthood. Clarissa died March 8, 1930.

Much of Clarissa’s efforts regarding social, humanitarian, and welfare work helped pave the way for today’s Church welfare system. The Relief Society established a training program for nurses’ aides. Five loan funds in honor of the past general presidents of the Relief Society were created at Clarissa’s request. The funds were awarded to female upper-division students, nursing students, and poets and were also used to assist in temple work. The first uniform monthly visiting teaching messages were published in the Relief Society Magazine.