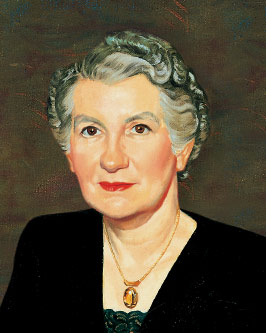 Shortly after Belle S. Spafford was called to be the ninth general president of the Relief Society, she received an invitation to a National Council of Women (NCW) meeting in New York City. Relief Society leaders had been members of this council for more than 50 years even though at times they had faced opposition, the travel was expensive, and the meetings took up valuable time.

After much consideration, Belle and her counselors decided to propose to the prophet that the Relief Society terminate its membership.

Belle presented her recommendation and reasons in writing to President George Albert Smith and then added, “‘We don’t get a thing from these councils.’

“[The] wise, old prophet tipped back in his chair and looked at her with a disturbed expression. ‘You want to withdraw because you don’t get anything out of it?’ he questioned.

“‘That is our feeling,’ she replied.

“He returned that paper to her and extended his hand. With considerable firmness he said, ‘You continue your membership in these councils and make your influence felt.’”1

Sister Spafford humbly took the counsel and in time, through her patience and faithfulness, won over the hearts of the women she worked with. Consequently, women around the world were blessed by her faith, wisdom, and inspiration as she not only led the Relief Society for 29 years but also served on the NCW for 42 years and as its president from 1968 to 1970.

Born October 8, 1895, in Salt Lake City, Marion Isabelle (“Belle”) Sims Smith was the last of seven children of Hester Sims and John Gibson Smith. Although her father died before she was born, her mother always made Belle and her siblings feel that their father was watching over them, along with their Heavenly Father and bishop.3 After completing her studies, she taught special education classes at Brigham Young University (BYU) in Provo, Utah.4

While at BYU, Belle met Willis Earl Spafford. They married March 23, 1921, in the Salt Lake Temple. Their two children were her top priority. “The most valuable contribution that a woman can make to society,” Belle said, “is to rear children who have internalized … values through the family teaching that would enable them to function as responsible citizens.”5 She died February 2, 1982.

Relief Society sisters united to donate more than $500,000 to build the long-desired Relief Society Building in Salt Lake City, Utah. It was dedicated October 3, 1956. In 1970, Relief Societies stopped raising their own funds and were given a budget. This allowed sisters to focus on compassionate service and visiting teaching instead of fund-raising. In September 1971 all sisters in the Church became members of the Relief Society.6 During Belle’s almost three decades as general president, she served under the leadership of six prophets.