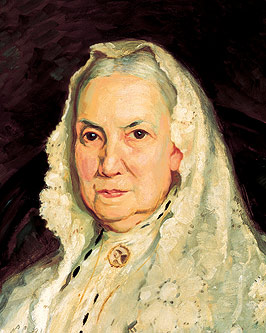 Bathsheba W. Smith, fourth general president of the Relief Society, had three great loves in life—her family, homemaking, and the Lord. Together, these loves carried her throughout her life.

Devoted to her husband and children and knowing she was doing the work of the Lord, Bathsheba dedicated herself to strengthening her family. Her husband, George A. Smith, was a cousin to the Prophet Joseph Smith and the youngest member of the Quorum of the Twelve Apostles when they married. He was frequently away serving missions, and Bathsheba often wrote to him of her love. “It seems to me I could not wish to enjoy myself better than to sit under the sound of your rich and lovely voice and hear you unfold the rich treasure of your mind,”1 she once wrote to him. Her children were just as dear to her. “They made our home joyous with song and just their pleasure was mine,” she recalled. “I was proud of them and so happy with them.”2

And so Bathsheba found great satisfaction in providing for them. Her letters and autobiography are filled with descriptions of the shirts, carpets, curtains, cushions, soaps, rugs, caps, pillowcases, sheets, comforters, bonnets, stockings, diapers, candles, dresses, aprons, and so forth, that she made to make her family comfortable, not to mention the animals she tended, the gardens she kept, and the sick she visited.3 She once wrote that she had “done all we could to encourage home manufactory.”4

Naturally, this love of home and self-sufficiency carried over into her time as general president of the Relief Society. As a result, the Relief Society published the first of what would later become known as Mother Education lessons, focusing on topics such as child rearing, industry, and marriage.5 Additionally, Relief Society wheat was shared with American Indians in Utah; earthquake survivors in San Francisco, California; and famine victims in China.6

Most important, “President Smith felt strongly that women needed to be spiritually self-sufficient and that Relief Society was the place for that to occur: ‘It is plainly necessary that women as well as men, cease not while life lasts to study diligently for the knowledge which is of greatest worth.’ ”7

The eighth of nine children, Bathsheba Bigler Smith was born May 3, 1822, near Shinnston, West Virginia, to Mark and Susannah Ogden Bigler. She lived a life of relative ease learning handicrafts and horseback riding on the family’s 300-acre plantation. But when the missionaries came to her door in 1837, that all changed. “I heard them preach and believed what they taught,” she wrote. “I believed the Book of Mormon to be a divine record, and that Joseph Smith was a Prophet of God. I knew by the spirit of the Lord which I received in answer to prayer, that these things were true.”8 The entire family was converted. The persecutions that followed drove the family to eventually join the Saints in Nauvoo, Illinois.

On July 25, 1841, Bathsheba married George A. Smith, one of the missionaries who had taught her family. They had two children. In time, her husband took on five more “good, virtuous, honorable young”9 wives with her blessing. Of this she wrote, “Being thoroughly convinced . . . that the doctrine of plurality of wives was from God; and having a fixed determination to attain to Celestial glory, I felt to embrace the whole gospel.”10 She died September 20, 1910.

At age 19, Bathsheba Smith was the youngest woman at the organization of the Relief Society in Nauvoo, Illinois, in 1842. She served as matron of the Salt Lake Temple at the same time she was general president. She felt that serving in the temple was one of the most important things she could do.11