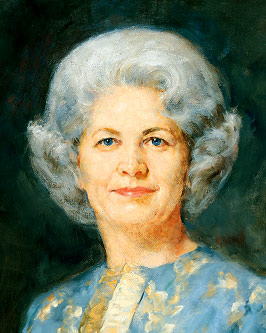 Barbara B. Smith, 10th general president of the Relief Society, led the women of the Church during a critical time in history. The proposed Equal Rights Amendment (ERA) to the U.S. Constitution was making women question their rights, roles, and value as mothers and wives. But Sister Smith defended the essential calling of womanhood and faithfully led women around the world in embracing their divine purpose as women.

“As sisters in Relief Society, women have a noble heritage, a present challenge, and a vision of greatness to be,” she once said. “With the organization of Relief Society came the Lord’s program for His daughters. The cornerstone of that work was to become deeply engaged in relieving suffering among His children. The prophet also instructed the sisters that their society is not only to relieve the poor but to save souls. That challenge is much with us today.”1

Motherhood is essential in the Lord’s plan for saving souls, and it helps women become more like Him. “‘Good family life is never an accident; it is always an achievement,’ she said. It was so for the women of the past, and it is so for us today. Our lives require discipline, coping without compromise, conversion of precepts into living principles that will make us saintly.”2

Sister Smith felt so strongly about the importance of women’s divine roles that she invited the women of the Church to donate funds to erect the Nauvoo Monument to Women in Nauvoo, Illinois. Of the finished monument she said, “The 13 pieces of statuary in this lovely garden setting are designed to share what we know to be true about the essential role, the irreplaceable contribution of women to life and to making life worth living.”3

In 1980 Sister Smith said, “I’ve become aware of the great purpose of the Relief Society. In the beginning, I thought Relief Society was the Lord’s gift to women of the Church. Now I know it is the Lord’s gift to his daughters everywhere, and that as women in the Church learn and implement the principles of the gospel, they will be an influence for good in the lives of women all over the world.”4

Testimony of Barbara B. Smith

The third of six children, Barbara was born January 26, 1922, in Salt Lake City, Utah, to Dan Delos and Dorothy Mills Bradshaw. Barbara’s parents were known for encouraging their children to do their best, and Barbara was an obedient child who liked to set and achieve goals.

Barbara met her husband, Douglas Hill Smith, while she was in high school. After a two-year courtship, they married on June 16, 1941, in the Salt Lake Temple. They were the parents of seven children. Although Sister Smith and her husband were often busy with Church, business, and community responsibilities, their children did not remember their mother being away frequently. They remembered her at home, teaching them, encouraging them, and entrusting them with duties that made them feel important to her.5 Sister Smith died September 13, 2010.

During Sister Smith’s administration, membership in the Relief Society grew from less than a million members who spoke 17 different languages to 1.6 million members speaking 80 languages.6 After her release, her Church service continued as her husband was called to serve as a member of the First Quorum of the Seventy and was named Area President in Asia. Barbara worked extensively on family history and authored four books.

Full Interview of Barbara B. Smith