Savior of the World Production

The production Savior of the World: His Birth and Resurrection is a powerful testimony of the Savior Jesus Christ. 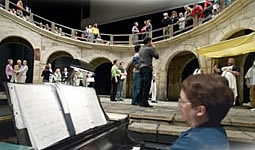 Through music and drama, the production recounts the historical events leading up to the birth of the Messiah and the events following His glorious Resurrection. Because of its scriptural basis, the production provides opportunities for the Spirit to testify that Jesus is the Christ. Consequently, inviting the Spirit into all aspects of the production is a vital part of preparing for a performance in which the Spirit can testify to both audience and participants.

Additional information for production leaders can be found under Learn More at the bottom of the page. Directors may particularly want to review producing a staged production, portraying the Savior and angelic messengers, and casting. All of this material can be downloaded in PDF form for reference.

If Savior of the World is presented as a Church activity, production decisions should be based on spiritual purposes identified by the priesthood leaders responsible for the production. These may include the purposes of Church activities listed in the Church Handbook of Instructions (book 2, page 271), such as strengthening the family, building testimonies, fostering personal growth, creating unity, and reaching out to less-active members and friends of other faiths. Keep the specific purposes of your priesthood leaders in mind while planning all aspects of the production, and consult with them often to ensure that their inspired vision is achieved. A priesthood representative may wish to attend planning meetings and rehearsals.

Select an appropriate type of production.

Select a format based on the purposes and resources designated by priesthood leaders. Savior of the World: His Birth and Resurrection can be produced in its entirety as a fully staged production, or the two acts can stand alone as individual presentations: Act One for Christmas and Act Two for Easter. See Casting for additional notes and suggestions. The production can also be adapted to other formats, such as a readers’ theater or a musical fireside with narration. Prayerful consideration will help you use the production to fulfill priesthood purposes and make use of available talents and resources. Under the direction of priesthood leaders, several wards or stakes may choose to combine efforts.

Depending on format, preparation will require from 3 to 18 months. Planning well in advance will help ensure that priesthood purposes are met and that rehearsals do not put undue hardships on families.

Seek inspiration from the Spirit.

Seek the guidance of the Spirit to meet the unique challenges you will encounter in the process of preparing your presentation.

Producing Savior of the World as a Staged Production

The following guidelines are primarily intended to assist those planning, directing, and producing Savior of the World: His Birth and Resurrection as a staged theatrical performance. These principles may also assist those adapting the production to other formats.

The type of production chosen will determine to what extent the director needs a background in theater and whether additional production staff members are necessary. If it is your responsibility to recommend people to fill these positions, prayerfully consider Church members with strong testimonies of the gospel. Counsel with priesthood leaders, and follow their direction.

Prayerfully select cast members from those who have strong testimonies of the Savior, who live in accordance with gospel principles, and who are able and willing to make the necessary time commitment. Where possible, involve families so that bonds are strengthened as family members share experiences. Usually children ages eight years and older are better able to concentrate during rehearsals. Plan for supervision and/or activities for children in the cast as needed. Always follow the guidelines for safeguarding children and youth in Church activities, especially in Church buildings where there are many rooms into which children and youth may wander off or find themselves alone with adults. Guiding children in appropriate behavior backstage as well as onstage will help invite the Spirit into the rehearsal process.

Approach acting from a spiritual perspective.

Fully realizing the spiritual potential of Savior of the World requires a unique approach to working with participants. Directors of traditional productions tend to focus primarily on telling the story of the play, the portrayal of characters, the artistry of theatrical elements, and so on. Leaders of Church productions should focus primarily on helping members and families spiritually prepare to share the gospel. Therefore, leaders should ensure that all aspects of rehearsals and performances are based on gospel principles of leadership, service, and brotherly love, and should include regular opportunities for gospel teaching and learning, the bearing of testimonies, and expressions of encouragement, support, and appreciation (see Create opportunities for spiritual experiences, below). The entire production effort should be a demonstration of the gospel in action, encouraging members to strive to “bear one another’s burdens” (Mosiah 18:8) and be “of one heart and one mind” (Moses 7:18).

Production leaders should also help participants “think of [their] brethren like unto [them]selves” (Jacob 2:17) and avoid the worldly tendency to view some roles as more important than others. Privileges for prominent roles, such as separate dressing rooms, should be avoided. Participants with large speaking parts should be strongly encouraged to reach out to and serve all members of the cast.

Respect participants’ sacrifices by planning effective rehearsals. Schedule rehearsals to best utilize the time of those involved and to minimize hardships for families, especially those traveling longer distances to participate. Wherever possible, family members in the production should have similar rehearsal schedules. Consider organizing several simultaneous activities during rehearsal so that everyone present is involved.

Throughout the rehearsal process, there will be occasions to discuss gospel doctrines found in the production. At appropriate times, production leaders may wish to testify of the events and concepts presented in the script. They may feel to invite the cast to ponder, study, and pray about the events depicted and their respective roles. In doing so, all involved may deepen their spiritual understanding. At times, the director may wish to teach specific doctrines concerning the Savior to all participants. Devotionals may be held at rehearsals and performances for this purpose. The responsibility of preparing devotionals may also be given to other members of the production. The script, scriptures, or other appropriate resources may be used to invite the Spirit into the rehearsal or performance. Devotionals should be short, so they do not unduly lengthen rehearsals or become a burden to prepare.

Special care should be taken so that sacred moments, such as angelic visitations and appearances of the resurrected Savior, are depicted with appropriate respect and reverence. In addition, portions of the Savior of the World script are based very literally on scriptural references and should be presented as written. Production leaders should review Church guidelines on the portrayal of Deity (see Church Handbook of Instructions: Book 2, 279). Additional suggestions are included under Portraying the Savior and Angelic Messengers and Casting. Seeking the guidance of the Spirit will assist the director in staging sacred material.

Under the guidance of priesthood leaders, you may wish to plan ways to take advantage of missionary opportunities created by the production. In addition to inviting less-active members and friends of other faiths to attend performances, consider involving specific individuals in the production itself, as appropriate. Inspiration and creativity will help you find the best ways to utilize their abilities, including such avenues as acting, stage management, set design, publicity, costuming, helping with children, and so forth.

Portraying the Savior and Angelic Messengers

Much of the production Savior of the World emphasizes the eternal significance of the events surrounding Christ’s birth and resurrection. Throughout the presentation, heavenly beings and their involvement in the lives of God’s children on earth are depicted through the chorus witnessing the action from the colonnade and through the visitations of angelic messengers such as Gabriel. Most importantly, appearances of the resurrected Savior to His faithful disciples are presented in the second act. Special care should be taken so that these moments are depicted with appropriate respect and reverence.

Angelic messengers—Gabriel, the angel to Nephi, the angel to Joseph, the angel to the shepherds, the angels at Christ’s tomb, and the ascension angels—should be portrayed by worthy brethren of appropriate ages (see Description of Characters). In these roles they should conduct themselves with the dignity befitting a heavenly minister on an errand from the Lord. Out of reverence for the sanctity of the temple, it is strongly recommended that angelic messengers wear theatrical costumes rather than modern white clothing which may suggest temple attire. It may also be helpful to distinguish angelic messengers from chorus members representing the heavenly hosts with slightly more elaborate costumes (see costume notes regarding Gabriel and angelic messengers).

When the Savior is portrayed on stage by a live actor, “it must be done with the utmost reverence and dignity” (Church Handbook of Instructions: Book 2,279, “Portrayal of Deity”). Only a faithful, temple worthy brother of wholesome personal character should be considered for the role. The dialogue spoken by the actor portraying the Savior is taken directly from scripture and should not be modified. It is also recommended that on stage the actor representing the Savior not turn to the audience directly and that his face remain mostly hidden (see also Depicting the Savior on Stage). The actor should not wear the costume publicly either before or after the performance, nor should he participate in a curtain call in that costume.

Sensitivity to the Spirit will aid directors and costumers in staging these sacred moments.