To The Shelter and Beyond

Sister Riccio proves that not all missions are alike and that the Lord truly calls us to where we are needed most. 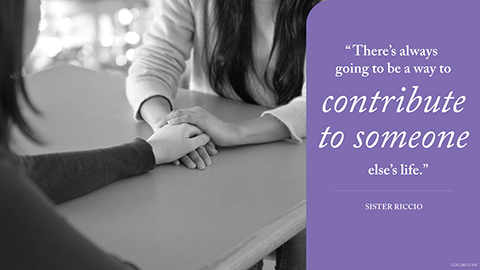 As a 21-year-old, Rachel Riccio sent in her mission papers to Church headquarters in the spring of 2014, and everyone thought she would be called to Japan. She’d already spent a semester there in a study abroad program and was fluent enough in the language to help teach English classes to the Japanese.

But the Lord had other plans for Sister Riccio. When her call came several months later, it was to a place she knew much better than Japan: Shelton, Connecticut, her hometown.

Sister Riccio has Ménière's disease, an inner-ear disorder that affects one’s sense of balance and sometimes causes bouts of severe vertigo. Knowing this, the Church first sent Rachel to nearby Boston for a week-long minimission in July of 2014. After that, she returned home, bought all her clothes (she started wearing a skirt every day just to be ready), and eagerly awaited her full-time call.

“We wondered why it was taking so long,” remembered Rachel’s mother, Karin. “And then, finally, it came.”

Rachel's call letter said that she was being called as a young Church-service missionary (YCSM)—the first YCSM in Connecticut and one of the first in the Church under an official new program for young people with health or other mitigating issues.

How did she feel about staying home to serve? “I couldn’t believe it!” said Sister Riccio. “I knew it was right. I’d been fasting and praying and had a difficult time waiting—patience isn’t one of my virtues—but when I learned where I was going and what I would be doing, I knew the Lord was looking out for me.”

She has slept in her own bed and had zero problems with her companion (YCSMs serve individually) as she’s provided missionary service in a variety of areas. She has worked as an ordinance worker at the Boston Massachusetts Temple, helped with research in the family history center in the New Haven stake, volunteered in a homeless shelter, and preached the gospel alongside sister missionaries in the Massachusetts Boston Mission.

“The temple and the homeless shelter—those were the two that felt most similar,” said Sister Riccio. “I felt Christ strong at both places.”

Nearing the end of her 18-month mission (after which she’ll return to Southern Connecticut State University to complete her degree in anthropology) she echoes what missionaries have been saying for years: hers is the best mission in the Church.

“It has been so wonderful. I encourage everyone I meet [who] has any kind of disability or anything like that to do this,” she said. “We can all contribute. There’s always going to be a way to contribute to someone else’s [life].”

“We’re so thankful for this program,” said Karin Riccio. “Health issues don’t mean you can’t serve. This has been life altering for Rachel.”

“Sometimes you say things are too good to be true,” said Sister Riccio, “when they really are real.”