Two young men. Two different backgrounds. Two life-altering accidents. One shared road to recovery. One forged friendship. One shared experience of serving the Lord in a unique way as young Church-service missionaries. And one discernible light radiating from their countenances. 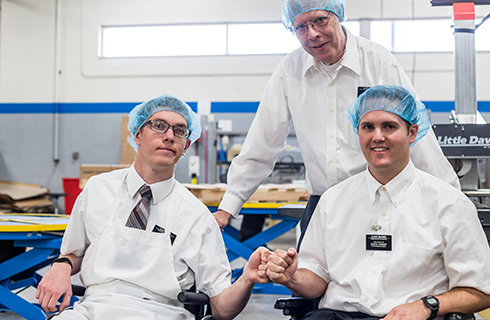 But there’s so much more to the story of how Elder Garrett Webb and Elder John McOmie ended up radiating light as young Church-service missionaries and good friends at the Church-owned Deseret Soap facility in Magna, Utah.

At age 17, Garrett Webb was like many young men in the Church—active in his quorum, ready to take on the world. But a serious sledding accident at a Scout campout changed his life forever. The traumatic brain injury he sustained left him in a coma for five months. Before Garrett regained consciousness, John McOmie, another patient recovering in the rehabilitation center, gave Garret’s parents hope by saying, “I used to be just like him.” When Garrett finally awoke, he and John became fast friends.

For John, the story was different. By age 19, despite his family background, he had strayed from Church activity and had no desire to serve a mission. But a motorcycle accident altered the course of his life. Following a 65-day coma resulting from a traumatic brain injury, John had no memory of his life before the accident and dedicated his future to the Lord. His family calls it his “Alma the Younger experience.”

For both young men and their families, the dream of serving a mission seemed out of reach. But after a lengthy recovery, Garrett spoke with his bishop and learned about the young Church-service missionary program. After learning more about the program, he was called to serve in the soap factory, screwing lids on soap containers and loading boxes onto pallets. 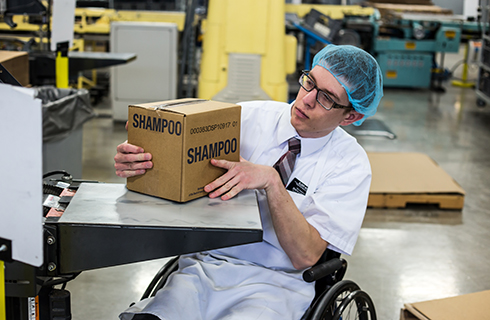 When John McOmie’s mom heard about the mission from Elder Webb’s mom, she too wanted to learn more. After some phone calls and paperwork, Elder McOmie joined his good friend Elder Webb in the soap factory. Now they work side by side, sometimes in their wheelchairs and sometimes in “standing battles” (they’re still learning to stand for long periods of time), serving the Lord by preparing soap for bishops’ storehouses and other humanitarian programs. And as they work, they push each other to be better missionaries, friends, and men.

At the end of his first day, Elder Webb, like many new missionaries, came home and said, “This mission is not for me.” He was frustrated with how difficult the tasks were. But now, eight months into his 18-month mission, he has grown physically and spiritually. What used to be physically challenging has now become more manageable. He is getting stronger through the work, his speech is improving dramatically, and his daily prayers sustain him through the struggles.

Elder McOmie feels the same. While he’s only been serving for three months, he has already seen the blessings of his mission. He is getting stronger physically, and he is committed to serving the Lord.

Perhaps the greatest blessing for these two elders, though, is the influence they are having on the lives of others, including their families, through their service and sacrifice. And not only are they blessing lives through the products they are preparing but they are growing closer to the Lord through their service, shining as bright examples to the world that regardless of circumstance, everyone can provide meaningful service and be a light to the world.