Young Church-service missionaries invite others to come to Christ 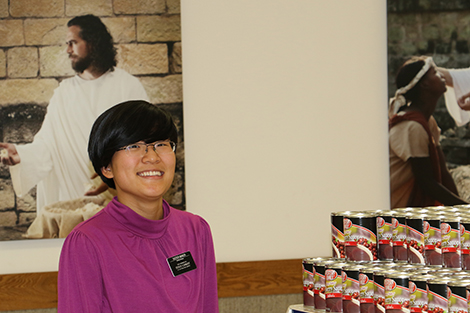 There’s an adage that advises, “Bloom where you’re planted.”

“In my family it’s ‘Bloom where you’re transplanted,’ ” Sariah Yiqun Baker said. Sister Baker has been “transplanted” many times in her 23 years. First from her native country of China as she was adopted by American parents and then as her family moved as her father fulfilled assignments in an international company. Most recently, Sister Baker put down roots in Utah where she finished a year as a Church-service missionary at Welfare Square.

And although she decidedly flourished in her calling, Sister Baker said fulfilling a Church service mission was not originally part of “the plan.”

Sister Baker was born in Shanghai, China, and spent the first three years of her life in an orphanage after being abandoned in a public park when she was a month old. Mark Baker was stationed in Shanghai for his job when he and his wife, Linley Baker, decided to adopt 3-year-old Sariah.

Her parents, who are members of the Church, named her Sariah after the well-known matriarch found in the Book of Mormon. Just like Sariah — the wife of Lehi and the mother of Nephi, Sam, Laman, Lemuel, Jacob and Joseph — “I had to leave and go to the ‘Promised Land,’” Sister Baker explained. They gave her the middle name Yiqun, which in Chinese means, “to run away and rise above the crowd.”

Sister Baker said she recognizes the blessing it was to be adopted by an LDS couple who taught her the gospel. “I could have been adopted to anyone, I think, but to have the gospel has been something amazing.”

So as she grew up, serving a full-time proselytizing mission was always part of her plan. After finishing a degree in psychology with three minors — French, sociology and interpersonal relations — Sister Baker submitted her application to serve. She was excited — and perhaps a bit disappointed to not be using her French skills — when she received a call to serve in Vancouver, Canada, speaking Mandarin Chinese.

After four months in the mission field, however, she returned early for medical reasons. “I was able to know, for myself personally, that I had learned what I needed to learn in those four months, but it was still difficult because I didn’t know what to do next. That’s when I was told about a service mission.”

The Young Church-Service Mission Program is available to young men ages 18-25 and young women ages 19-25 where a full-time proselytizing mission is not possible due to health or other considerations. Young service missionaries can serve at or near home in a variety of possible ways including assisting in family history research, indexing, image processing and support; volunteering in information and communication services or publishing services; providing administrative assistance and office support in mission offices or seminaries and institutes; or assisting in welfare operations such as bishops’ storehouses, Deseret Industries facilities and employment resource centers.

Among other responsibilities, Sister Baker’s service included hosting tours of the bishops’ storehouse and Welfare Square, sometimes alongside sisters from the Temple Square Mission, as well as providing service in the dairy, bakery or cannery.

“I sometimes joke that my mission is ‘Welfare Squared,’” Sister Baker quipped, “because I’ve served at [Welfare Square] and with the Temple Square sisters.”

One of the benefits of performing a service mission, Sister Baker said, has been its flexibility. The minimum requirement for Young Church-service Missionaries is eight hours of service per week for six to 24 months. Sister Baker was able to live with her grandparents in Bountiful and maintain a schedule every week where, in addition to her 32 hours at Welfare Square, she attended the temple and an institute class. She was the first in her family to graduate from institute.

“You can work around what would work for you, yet still be able to serve the Lord,” she said.

Her perspective began to change, she said, as she studied the Savior’s work and ministry. Sister Baker recently wrote in an email to her friends and family: “Looking at the Savior, and His ministry, I realized that He wasn’t just teaching and organizing His church; He served! He healed people, comforted them, brought some back to life and, of course, the biggest service He did was the Atonement. He was all about service. Why? Simple, He loved us! I’m truly convinced that He is pleased with my work. I was so blessed to understand the true meaning of service and love. I learned to not only serve people less fortunate than me, but those of different cultures and those who probably struggle with mental or physical challenges that I may never fully comprehend.”

The welfare program, she said, invites people to come to Christ. “If you can feed the hungry, it helps them be so much more open to the spiritual part.” Service comes down to that love of Christ. “That’s one thing that I think really allowed me to be able to say, ‘I’m on a mission.’”

Now that her mission has ended, Sister Baker plans to move to Delaware where her parents are located. Being in a business environment on a service mission has also inspired her of a direction to go in her education and career.

“I decided after being here that I could improve the world through companies, through business. I want to go into human resources and from there build up my curriculum so I [can] actually be able to work in consulting … so that I can not only improve the lives of employees, but the life of the company, which improves the lives of others.”

Sister Baker said if someone ever asks her “Should I serve a service mission?” her response will be, “Yes, you should. I would recommend it.” She then added, “I have had more peace than I ever have found in my life serving in this mission.”