A Mission Without a Name

Elder Smith learned that even though everyone’s circumstances are different, that doesn’t mean everyone can’t serve. 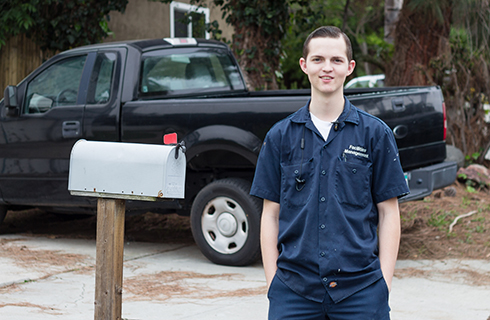 You can count on a lot of returned missionaries knowing two things: One, that the gospel is true. And two, that their own mission experience was invaluable.

Darian Smith is no exception. Released April 10, 2016, from a mission so unconventional it didn’t even have a name, he proudly stated, “I would never in a million years take another mission over my mission.”

This from a young man who was told two years ago that some missteps in his youth (“I had a bad moment in my life,” he said) precluded him from serving a full-time proselytizing mission.

Down but not out, Darian huddled with the bishop of his ward in Vista, California. They put their heads together and came up with a Plan B: Perhaps Darian could instead serve as a young Church-service missionary.

With Church approval, Darian’s newly called bishop, Steve Huyett, and his stake president crafted a custom-made mission for him that involved two areas of service. One was working 40 hours a week in the South Coastal Facilities Management Group, the organization that provides physical maintenance for 23 Church buildings in northern San Diego County. Another was serving in the San Diego California Temple.

But first, Darian had to finish high school.

“He had one class to take to get his diploma,” said Bishop Huyett. “Going on a mission was important enough that he powered through. It was all his initiative.”

For two years, with the Holy Ghost as his companion, Elder Smith spent Monday through Friday doing everything from electrical work to plumbing to heating and air conditioning maintenance at area chapels, and three nights a week he served in the temple. And just as a way to do something extra, he also assisted the area’s Little League baseball program on Saturdays, umpiring hundreds of baseball games. 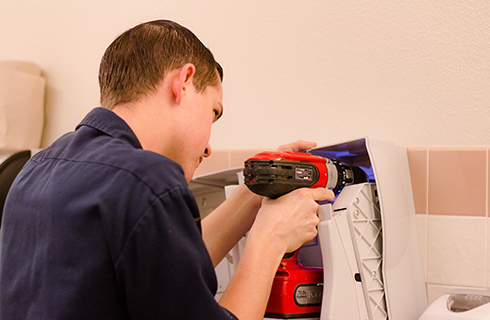 “I learned so much on my mission,” said Elder Smith. “One thing I learned was that even though everyone’s circumstances are different, that doesn’t mean everyone can’t serve.”

“He wanted to serve the Lord, and he did a really significant service during those two years,” said Bishop Huyett. “He’s well satisfied and pleased with himself for what he’s done, and deservedly so. I think in many ways young Church-service missionaries have to have more discipline than regular proselytizing missionaries. They have no companion to keep them in line, they have to do their work on their own initiative. He did that. His mission proved to be ideal for him.”

Proof of that was the last day of Elder Smith’s mission, when he had to hand in his master keys to the facilities management group.

“That was hard, turning those keys in,” he said. “I couldn’t get back in the buildings. I hated to leave what I’d been a part of. And I couldn’t really believe it had already been two years.”

That’s another thing many returned missionaries can be counted on to say. 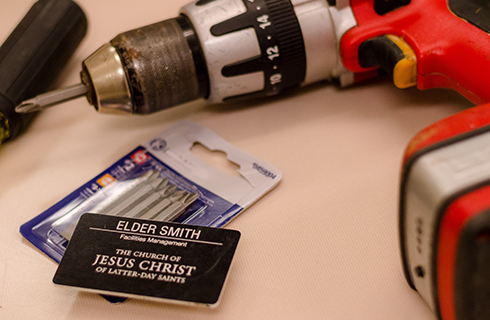