Eighteen Years of Service and Counting 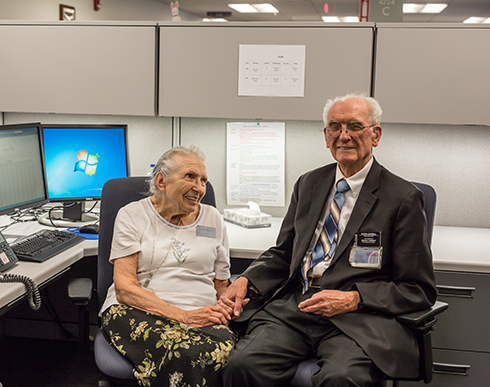 The minimum age at which you can serve a mission is 18. The maximum age is—well, you better ask the Gatrells.

In 1997, Wallace and Ruth Gatrell of Farmington, Utah, were called to a one-year Church-service mission in the member location department in Salt Lake City. Wallace was 77 and Ruth was 76.

Every year when their term is over, they re-up. So far, they’ve served for eighteen straight years and counting.

“We want to do this as long as we can,” says Sister Gatrell.

There are no documented records for the most consecutive years served or the oldest companionship. But if there were, the Gatrells might hold both.

Wallace didn’t get to serve a full-time mission when he was younger because of his World War II service. He joined the Utah Army National Guard in 1938 when he was 17, figuring he’d signed on for a camp held for two weeks every summer and a meeting once a month. But in 1941 when he was a junior at the University of Utah, President Franklin D. Roosevelt activated the National Guard around the country for full-time duty. Wallace spent the next four years fighting in the Pacific, helping the United States win the war. He came home long enough to marry his sweetheart, Ruth (they’d met in a botany class at the University of Utah before the war), and then was off to fight in the Korean War, where he won the Silver Star for bravery.

Wallace made the military his career. He and Ruth traveled the world from army base to army base while raising their eight children. 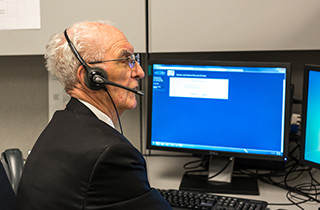 After Wallace retired as a lieutenant colonel, the Gatrells returned to their Utah roots. They accepted their first Church-service mission call in 1997, and ever since they’ve reported like clockwork every Wednesday to the member location department in downtown Salt Lake City, where they spend eight hours searching for members whose whereabouts are unknown.

“Every day we see the hand of the Lord in this work,” says Brother Gatrell.

“It feels like a continuance of our first mission—like we’ve just been doing it for 18 years,” says Sister Gatrell, who didn’t ask to be released when she suffered a stroke three years ago. “We love it, and we’d like to stay with it as long as we can.”

And how is their companionship holding up? Better than ever, says the couple, who will celebrate 71 years of marriage this July. “I couldn’t do this without her,” says Brother Gatrell, to which Sister Gatrell responds, “Ditto.”