Aaronic Priesthood leaders and young men from around the globe share their experiences with the Scouting program. 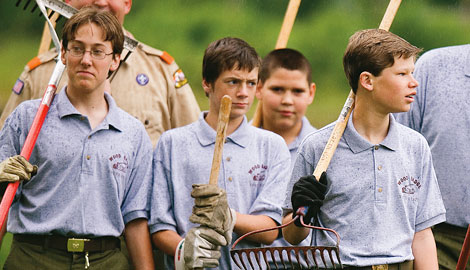 Dan Agular has just turned 14 and was recently ordained a teacher. He is a joy to have around and is always one of the boys to have a quick joke and keep things fun. He attended the Mountain Man for the first time this year and had a spiritual experience on Friday night after the General Authorities spoke to the Scouts about the importance of serving a mission. After we got back from the fireside on Friday night, Dan disappeared, and we really did not know where he was for a while. About 10:00 p.m. he came back to camp very quietly and sat down next to Brother Thomason and me. Brother Thomason and I were talking about our missions and we each told Dan a few stories about some experiences we had while on our missions. The Spirit was there and after we shared our testimonies, Dan told us where he had been. He said after the fireside he got to thinking about serving a mission and wanted to know if he should serve a mission. He said he decided to pray about it, so he quietly left camp and found a secluded place where he could offer a prayer to Father in Heaven. He said as he prayed he got an answer that he knew a mission was the right thing to prepare for and he needed to keep himself worthy to serve. As he shared this story, the Spirit testified to us he had received answers to his prayer.

How Scouting Led to Baptisms

Sister Arenivar asked the Scout leaders in her ward if her two boys could attend Scouts with their neighbors. Dylan (11) and Dustin (13) were invited to attend at the local LDS Church. Dylan and Dustin did very well in the Scouting program and earned many merit badges. A court of honor was held in which Dylan and Dustin received Scouting awards. The boys’ grandparents, parents, and aunt attended the court of honor.

At the end of the court of honor, Bishop Spencer Grant invited the family to take a tour of the Church building and then invited them over to his house for refreshments. The bishop also invited the ward mission leaders over with the family to his home. At the bishop’s home, the Arenivar family was taught about the gospel of Jesus Christ. At the conclusion, the grandfather was so impressed with the Scouts, the bishop, and the ward mission leaders that he asked to learn more about the Church. The missionaries were contacted and regular meetings were set up with the grandparents and the aunt. After four weeks the grandparents (Brother and Sister Mouett) were baptized. Shortly after, Jose, Deb, Dylan, and Dustin Alenivar were baptized along with their aunt Roxanne Mouett.