Aaronic Priesthood leaders and young men from around the globe share their leader experiences. 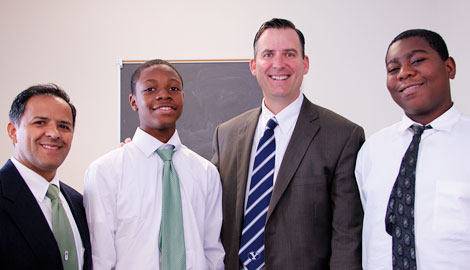 Bishop Involved in Duty to God

Brother Jerry May, Young Men president in the Monument Park 1st Ward, says their ward began implementation of the new Duty to God program by holding a special gathering for Aaronic Priesthood holders and their parents. The meeting was held on a Wednesday evening, during regularly scheduled Mutual/Scouting time. "We prepared for the meeting by ordering enough Duty to God and For the Strength of Youth brochures so that each young man and his parents could have their own personal copies. We labeled the family copy (for example, "The Smith Family"). We encouraged the parents to keep both booklets close at hand to and refer to them often in family home evening and in personal interviews with their sons."

Leaders in the Monument Park 1st Ward presented the new Duty to God video, followed by brief remarks from the Young Men presidency, including the secretary, who spoke about how to effectively track progress, while avoiding a "checklist" approach to the program. The ward Scoutmaster spoke about the relevance of Scouting and how parents can, and should, incorporate both programs—avoiding the "either/or" attitude of choosing between Scouting and Duty to God. Bishop Bruce Robinson concluded the program with a special promise to the young men. He committed to them that he would follow the new Duty to God program, reporting to his own aging father. He testified that he knew he would draw closer to both his earthly father and his Heavenly Father by living the program.

The Monument Park 1st Ward is following up with repeated discussions in Sunday quorum meetings. Every class begins by having a "Duty to God minute," in which each Aaronic Priesthood holder, as well as the bishop, is asked to discuss his weekly activities as they relate to the program. "It's our time to reinforce that we 'learn, act and share,' says Brother May.

I have served as a bishop of the Angel Crossing Ward in the Layton Utah South Stake for a little over five years. Shortly after I was called, we were introduced to the Preach My Gospel (PMG) manual. We did not have many young men in the ward at that time, but I decided I wanted to use PMG as the curriculum for the first Sunday of the month. I felt that if we could prepare the young men in our ward for a mission by learning Preach My Gospel and having a forum to share experiences about missionary service, these young men would be much better prepared to hit the ground running, rather than spending the first six months trying to learn the PMG content.

Every fast Sunday, we combine the young men and teach them the principles found in PMG. We rotate teaching assignments among each bishopric member. We focus on teaching the plan of salvation, the Restoration of the gospel, and the Apostasy.

After this presentation we separate the young men by age—oldest and most experienced priest with the youngest deacon. We assign them one concept to read and become familiar with. During this time we encourage the companionship to learn the material, decide who is going to teach what part of the concept, discuss the commitment pattern, discuss how they will use their scriptures, and discuss how to bear their testimony.

Once they are separated and studying the concept, we assign one of our Young Men leaders or bishopric members to play “investigator.” The young men are required to teach the leader as if he were an investigator. During this dialogue, the investigator can ask questions or present circumstances that might be a hindrance for the young men. We make sure it is a very safe environment.

At the end of the role play, we invite the leader to ask two questions to each of the young men: “What did you do well?” and “What would you do differently next time?” We discuss this with each companionship and then debrief as a group on what went well and what each boy learned. This chapter of PMG may take the better part of two years to go through, but it’s allowing gospel related discussions and concepts to be learned and taught.

We have had a couple young men return from their missions after going through this process. They always state how grateful they were that we started teaching PMG prior to them attending the MTC.

After we have completed the lesson, we gather around the table and kneel and pray. Whoever the spokesperson is always remembers to pray, by name, for those young men from our ward who are serving in the mission field. We hope that when each young man goes on his mission, he will know that at the end of each priesthood meeting, we as an Aaronic Priesthood group will be praying for his success and safety.