Great Things the Youth Are Doing

Aaronic Priesthood leaders and young men from around the globe share their experiences with the great things the youth are doing. 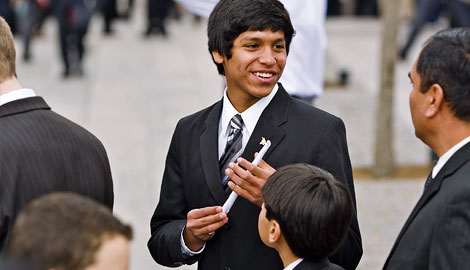 Bishop Randy Wright of the West Jordan River 6th Ward issued a challenge to his ward family and in particular to the youth. He states: “At the beginning of the year, we had a 40-day fast in our ward (40 families or members fast for one day consecutively). The purpose of the fast was to help our ward focus on families that needed to return to the temple. At that time, I asked the youth to set a goal for attending the temple, and they really took it to heart. Our young men and women started going to the Jordan River Temple every Wednesday morning at 5:00 a.m. They have done this throughout the year. It has been wonderful to see the baptistry staff get close to these youth. So far this year the youth have performed close to 3,800 baptisms. It has been a wonderful experience to watch the love of the temple grow in the eyes of these youth. I just wanted to let you know that the royal generation is moving forward.

My dad fought cancer for four years before he passed away. Many acts of service were given to my family at that time, and many people acted as instruments in God’s hands to bless our family.

At one point my dad was having seizures and was asked by his doctor not to drive. My dad’s work was about an hour away, so it became difficult for my already exhausted mother to spend four hours a day taking my dad to and from work. At this time, several men in the ward with flexible schedules volunteered to take turns driving him to work each day. During the summer, several of the young men preparing for missions would also take turns driving my dad. It was a simple task, not at all glamorous, but it was time consuming and a sacrifice for them to take that much time out of their schedules to serve my family. I know my dad enjoyed their companionship and it became an enormous blessing. The young men became some of my dad’s closest friends and they supported my family and my dad to the very end.

During the four years of cancer treatments, young men came on several occasions to help around the house—climbing up ladders to change light bulbs and dust ceiling fans, cleaning, raking leaves, sweeping out the garage, and doing other things around the house to help.

In the end, we had family and friends taking shifts in his hospital room so he would not be alone and all of his medical needs would be taken care of. It was a very difficult kind of service to do—my dad in pain, having panic attacks and difficulty breathing—yet it was Bill Moore, one of the men who drove him to work, who was with him when he passed on. The young men were truly great examples of what it means to develop Christlike love.