Aaronic Priesthood leaders and young men from around the globe share their experiences with Duty to God. 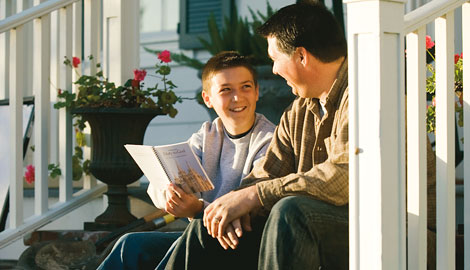 Austin Carter arrived a bit early to stake conference and was quietly studying Preach My Gospel while he waited for the meeting to begin. A visiting authority noticed him and began quizzing him about his priesthood duties. When Austin revealed that he was the deacons quorum president in his ward, a challenge was issued: Activate every deacon so that the entire quorum is attending Sunday meetings.

How did he approach that challenge? By using the priesthood keys as the quorum president and involving all of the members of his quorum.

“I had regular meetings with my quorum presidency. We would meet at my house, start with a prayer, talk about the members of the quorum, and then go on visits. We weren’t always warmly received, but we were persistent. Each week we had a short presidency meeting right after priesthood where we reported to our quorum advisors. They listened and helped us understand our responsibilities.”

Brother Carl Vance, Austin’s quorum advisor and Scoutmaster, reported: “I told him ‘you have the priesthood keys of the quorum and know what to do. I will support you, but the quorum is your responsibility.’ I was happy to let the presidency do their duty. After all, they are better at it than we are!”

Austin commented on the great adult advisors the boys had, both in the priesthood and in Scouting. “Our advisors understand that we as youth need to plan our own program. They stood ready to help us, but they let us plan the activities and make things happen.”

Brother Vance stated: “After one Sunday meeting President Carter approached me and said, ‘Brother Vance, I think we need to spend more time working on Duty to God.’ I was happy to support the quorum president in this request!”

Austin has been released and is now a teacher in his ward. Brother Vance excitedly explained, however, “The pattern has been set. The new president and his counselors continue to function as an effective presidency. It is exciting to see how many young men have learned to magnify their priesthood in our ward.

What happened with the assignment Austin was given during stake conference?

After several months of regularly inviting the young men as a presidency, Austin reported to the visiting authority with a letter stating:

“I finished your challenge. All of the less-active deacons are coming to church. I am starting to get an idea of the kind of work I will be involved in on my mission. Thank you for the challenge. I will continue to work with others that I know and share the gospel with them.”

This quorum president and his leaders all clearly understand the following injunction:

“Wherefore, now let every man learn his duty, and to act in the office in which he is appointed, in all diligence” (D&C 107:99).

I have received countless blessings through using the Duty to God book. It is a fantastic book the Church has produced. I know that it is from Heavenly Father, and it is a great blessing in my life. One experience I had with Duty to God was when I was working on the section titled “Doctrinal Topics.” During that time I was called as deacons quorum president. I didn’t know what to expect, and I didn’t know if I was qualified to hold the sacred keys of the Aaronic Priesthood. Through “Doctrinal Topics” I studied “Priesthood and Priesthood Keys.” It taught me how these keys came to the earth and how I use them to receive revelation from Heavenly Father. I was stunned by how much knowledge was at my fingertips. I searched many books about this topic and received many useful things from them. I eventually prayed to know if I was worthy to hold these sacred keys. Instantly the Spirit fell upon me gently but with a strong witness that Heavenly Father loved me and He had a work for me to do in this quorum in these last days. I felt I was ready and worthy to hold the sacred keys of Heavenly Father. This book is not just a book. It is a blessing. And I want to share this blessing with my quorum members. The Duty to God book is one of the greatest things here on earth today. It prepares you for everything in life. It will help with what you’re going through now and what you are eventually going to go through. I am so grateful for this book.

Visit DutyToGod.ChurchofJesusChrist.org to get the complete book, video resources, answers to questions, and encouragement from Church leaders to strengthen young men.

Duty to God in the News